My favorite line from my favorite baseball movie of all-time still manipulates my tear ducts every time. For me, the simplest, purest, American-dreamiest act of childhood is a baseball catch with the old man. Like leather bookends, a pair of game-weathered baseball gloves catches more than just a cowhide sphere tossed back and forth. They capture memories that span multiple generations of sons who become fathers and fathers who become little league coaches.

I was a son coached by his father. For the past seven years, a coach of my own two sons. From the beginning of my coaching days, it was hard not to wax nostalgic and think back to my own playing days. The idealist in me wanted to believe that little league baseball was nothing more than an organized version of The Sandlot. Every game would begin at the crack of dawn and end under a night sky lit by fireworks and accompanied by Louie Armstrong’s “What a Wonderful World”. Best of all, in this most wonderful of baseball worlds, parents were nothing more than glorified extras who sounded an awful lot like the adult actors from the Charlie Brown TV specials.

After seven years of coaching little league baseball, however, the realist in me knows better than to get all misty-eyed when I hear Mr. Armstrong’s heartfelt, raspy-voiced lullaby. In this coach’s opinion, what happens between the little-league foul lines is still every bit as wonderful a world as promised. But outside the foul lines, a little league field of dreams can become a nightmare for some unsuspecting players and coaches.

“I always said that the only team that I would coach
would be a team of orphans, and now here we are.”
–St. Louis Cardinals manager, Mike Matheny, in a letter to his little league parents

Mike Matheny’s letter to parents is a must-read for every coach. For little league parents, it sets the perfect tone for what a coach is trying to accomplish and what he expects from parents. “The reason for me saying this is that I have found the biggest problem with youth sports has been the parents. I think that it is best to nip this in the bud right off the bat.” Matheny continues: “…if you hand your child over to me to coach them, then let me do that job.”

Without the benefit of Matheny’s words, I signed up to coach in Louie Armstrong’s version of little league baseball. My goals were simple: 1) Have fun and teach the game of baseball the same way my father taught me; 2) Try to be a positive influence on and off the field; 3) Play to win, but teach my players how to win and lose with class. In terms of setting expectations, I still preach a simple philosophy: Regardless of how far your future baseball career takes you, baseball is never more fun than when you’re a little-leaguer. Unless, of course, a “bad little league parent” stands in the way of the fun.

“By the time I was ten, playing baseball got to be like eating vegetables
or  taking out the garbage. So when I was fourteen I started refusing.
Can you  believe that? An American boy refusing to play catch with his father.”
–Ray Kinsella, Field of Dreams

Yes Ray Kinsella, I can believe that an American boy would refuse to play catch with his father. Especially if each backyard catch comes with a time clock, and each punch of the time card raises expectation levels. It’s these expectation levels that can burden the child with an unspoken promise to repay dad with a stellar little league career. Call it little league baseball’s “Daddy IOU.” If you think that’s a stretch, visit a neighboring town and sit anonymously in the stands during a Williamsport All-Star game. If that’s not possible, read about the ongoing survey conducted by two former coaches, Bruce E. Brown and Rob Miller. They asked hundreds of college athletes to think back to their worst memory of playing youth sports. The most common response: “The ride home from games with my parents.”

Based on this response, it’s not surprising that nearly 75% of kids who play organized sports quit by the age of 13. Sure, you can argue that some quit out of necessity…as they fail to keep pace with their bigger, faster, more athletic peers. Yet so many others quit for a simpler reason. Like Ray Kinsella before them, they start playing baseball for the love of the game…and wind up playing for the acceptance of their parents. What starts out as a game played for fun ends with anxiety-inducing memories that are stitched into a child’s psyche tighter than cowhide to string.

“I know that it is going to be very hard not to coach
from the stands… but I am confident that this works in
a negative way for their development and their enjoyment.”
–St. Louis Cardinals manager, Mike Matheny, in a letter to his little league parents

Before I started coaching, I used to love it when the ESPN cameras panned the stands during a Little League World Series game. “What were all those cheering parents feeling?” I’d ask myself. Joy for their children; pride for their hometown team’s accomplishments; gratitude for their coaches? I’m sure there’s plenty of all three. But I’m also willing to bet that for every “root, root, root for the home team” cheer, there’s an email being composed about playing time. There’s a whisper about how “my son” would have made that catch. And there’s at least one parent who feels that even the biggest victory is pyrrhic if “my son” doesn’t shine.

It’s no different when you move back to the diamonds in the rough in your own home town. Every player is dissected, each inning is revisited, and statistics are obsessed over like hanging chads. Parents record at-bats and then analyze the swings frame-by-frame like the Zapruder film. Coaches are second-guessed about batting positioning, defensive positioning, and playing time. Worst of all, unsuspecting players are often evaluated through the rose-colored (“my kid is better”) lenses of parenthood.

“I think the concept that I am asking all of you to grab is that
this experience is ALL about the boys. If there is anything
about it that includes you, we need to make a change of plans.”
–St. Louis Cardinals manager, Mike Matheny, in a letter to his little league parents

Now most baseball parents, to be fair, are well-intentioned. They simply love their children and want them to enjoy the same highs or avoid the same lows they experienced as children. Even Matheny admits: “A large part of how your child improves is your responsibility. As a parent, you can help out tremendously by playing catch, throwing batting practice, hitting ground balls, or finding an instructor who will do this in your place.” I couldn’t agree more. There’s no better way to help nurture your child’s love for the game than having that backyard catch every time he or she asks. The challenge comes when you move from the backyard to the ballpark.

Let’s be honest. Who among us, present writer included, hasn’t been a “bad little league parent” from time to time. Have you ever argued a blown call made by a teenage umpire? Maybe. Have you ever second-guessed a coach about your child’s batting position or playing time? I’m sure you have. Heck, have I failed to show the same level of post-game enthusiasm after my son’s 0 for 4 as I have after his 4 for 4? You bet. But I’ve learned to stop myself. I’ve learned that the game should be played between the foul lines, and it should end when you step outside those lines. I’ve also learned a lot from Bruce E. Brown and Rob Miller.

In the same survey from Brown and Miller, the same college athletes were asked what their parents said that made them feel great. What elevated their joy during and after the game? The overwhelming response: “I love to watch you play.” 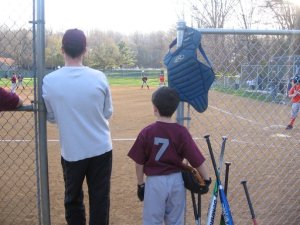 Before the Winter thaws into Spring training, drive through your hometown and slow to a crawl as you pass by your local little league field. Look passed the weathered advertising banners, the makeshift press box, and the broken-down bleachers. Just focus on the field. The field represents so much more than just the promise of next season. The field is a time capsule. It holds the memories and dreams–both fulfilled and unfulfilled–of every little leaguer who’s ever stepped inside the chalky-white foul lines.

“And they’ll watch the game and it’ll be as if they dipped
themselves in magic waters. The memories will be so thick
they’ll have to brush them away from their faces.”
–Terence Mann, Field of Dreams

Allow yourself to think back to a moment when a little league field was “the most special place in the whole world” to you. Close your eyes, listen closely, and you just might re-hear the cheers or re-feel the goose bumps from your most enduring little league memory.

And if we all listen to the words of Ray Kinsella, Brown and Miller, Mike Matheny, and Terence Mann…maybe we won’t hear all the screams, the whispers, the second-guessing, and the berating this coming season. Maybe during each game we’ll hear the raspy-voiced lullaby of Louie Armstrong’s “What a Wonderful World”.

And after the game, regardless of the outcome, maybe we’ll hear six simple words from a parent to their child:

“I love to watch you play.”