(NOTE: This post was originally published in 2015…for my 20th wedding anniversary)
Today, we celebrate 25 years. And still, we’ve never had a fight (that I won).

My original blog post concept was to cover the pop-culture landscape of September, 1995. That plan backfired when Wiki revealed the #1 song and film on my wedding day: Coolio’s Gangsta’s Paradise and Swayze’s To Wong Foo, Thanks for Everything! Julie Newmar. I can’t work with that, but I’ll try.

While Helena and I have Wang Chung’ed before, we’ve never Wong Foo’d. Unless “wong foo’d” is what happened the first time I called her home.

Allow me to explain…

September, 1991
I was a college sophomore, working two part-time jobs, commuting to Seton Hall twice daily, and I’d “been spending most my life living in a Gangsta’s [’79 Camaro].” Helena was a fellow working-class commuter, and a cute one at that. We exchanged phone numbers for “homework purposes” because I was a player. Then, I called her house 2 months later cuz that’s how players play. To quote Coolio again, “I’m the kinda G the little homies wanna be like.”

I left a message with Helena’s mother, Mrs. Moreira, whose native language is Portuguese:

“Can you please tell Helena that Shane called.“

But my eight-word English message was truncated into a one-word (Chinese???) message:

Needless to say, Helena never returned my call that night. Shanco was wong foo’d. Thanks for everything, Mrs. Moreira!!!

September, 1995
Ultimately, Helena would receive one of my messages and we married at the barely-legal age of 22. Following the ceremony, we celebrated with a barely-fire-code-legal 265 guests at Newark’s Sports Club Portuguese. Then we honeymooned in Key West, where I spent the first 48 hours introducing the honeymoon suite’s shitter to a liqueur that most call Sambuca, but I called Some-pukin’. 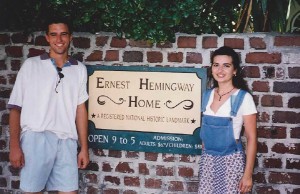 True to the first reading at our wedding, “love is patient…love is kind”. Helena was both during our first 48 hours as wife and “Exorcist baby.” And Helena’s been the most patient and kind partner for the past 25 years.

As blog-post pot luck would have it, the #1 Twitter hashtag on the eve of my anniversary was #MarriageAdviceIn3Words. “Never Stop Learning” works for me, as does “Marry Your Friend” and “Make Her Laugh.” But as you’ll soon learn, I’m in no position to give marital advice. Instead, I’ll simply share the 3-word marital tweets that made me laugh the loudest…

Do The Dishes
I have the world’s greatest mother. Having said that, mom made my bed, cut my meat, washed and ironed my clothes, and then sent me out into a 1990’s world as a 1950’s greaser husband. Like the “Shanco” story above, it took me some time to “get the message” about how to be a good husband. As the legend goes:

We had our first real dinner guests about 2 months after moving into our apartment. Somewhere between dessert and Pictionary, this happened:

Friend 1:
Should I put the dishes in the dishwasher?

Shane:
We have a dishwasher?

Friend 1:
Helena, is that your husband?

Check Ancestry.com First
This tweet cracked me up. Even if there were an ancestry.com before I proposed, I wouldn’t have needed it. I knew I hit the future in-law jackpot when I first met the Moreiras. Despite the fact that I once knocked on their door with a Doo-Rag on my head (“I’m the kinda G the little homies wanna be like”), they welcomed me to their amazing family with open bracos.

My in-laws have introduced me to so much: culture, vino, their native Portugal, and the concept of long lunches that eventually turn into dinner. In short, the Moreiras are the exception to the in-law rule and I’m so proud to be the adopted son of a Portuguese-American family.

Love Things Together
Some things we loved together from the start (Movies, 80’s Music, My Hair). Other things we learned to love together (Rom-Coms, Christiano Ronaldo, and The Hallmark Channel’s “Countdown to Christmas”, which begins in less than 50 days for those keeping score at home). A perfect example of learning to love things together: BASEBALL.

During baseball season, my beloved Mets dominate weeknight television in our family room. Helena joins us, but her knowledge of baseball vernacular begins and ends with the screenplay for the 1989 baseball classic, Major League. During games,  she speaks only in Major League terms and in the character’s voices:

After an anemic offensive output from the Mets:
“That’s all we got, one goddamn hit?”

After Pete Alonso boots a ball at first:
“Don’t give me this olé bullshit!”

After a Robinson Cano strikeout:
“Up yer butt Jobu!”

Major League is a major reason why my wife and I don’t only watch rom-coms together. It’s also a perfect example of how we’ve learned to Love Things Together.

No Comb Overs
Helena will always be my one-woman fashion police department. The first time she said yes, she told me it was “my hair” that attracted her to me. Today, my hair is allergic to me. Yet, she loves my hairs just the same. She just has one simple rule: “No Comb Overs.” Oh, she has other rules too…

Like many years ago, I discovered that working out actually grows muscles. Inflated by this realization, I decided that sleeves were overrated. (As shown below: by “muscles”, I simply mean that my biceps were no longer just skin on humerus).

Once again, Helena was there to show me the error of my humerus ways…

Shane:
“Helena, what’s the dress code at this restaurant?”

And it works both ways. I’m also happy to offer Helena advice. Like the time she started a weight-loss program…

Shane:
“Have you considered Couch To 5K Helena?”

Helena:
“Have you considered Couch to Fuck You Shane?”

As You Wish
Helena and I also support each others wishes. Helena’s wishes often turn into impulse buys that are small and practical. She will buy the shit out of anything labeled “Pampered Chef” or “As Seen On TV”. Not to minimize these impulses, but let’s just say that Helena puts the WOW in ShamWow.

My impulse buys, on the other hand, are far less practical and far more Pennyfoolish. Nonetheless, Helena is always supportive. For example, she fully supported my mid-life diversion from mid-sized sedans to a Mini-sized Cooper. And she was always there to help stuff 4 little-leaguers and 3 bags of baseball equipment into Pennywise’s clown car. 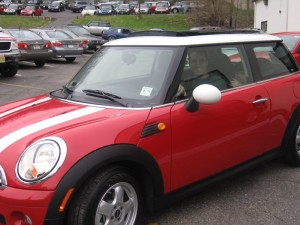 All joking aside, 25 years is a long time and there’s reason to celebrate. But I have no sage advice to give or secrets to reveal. Marriage isn’t guided by 3-word tweets. It’s nurtured by 2 people who fall in love, take a chance on each other, and are willing to stick by each other through thick and thin, mid-sized and Mini.

Happy Anniversary to my eternally beautiful, patient, and kind Portuguese princess, Helena. Or, as it translates into Chinese…

Thanks for everything, Helena!