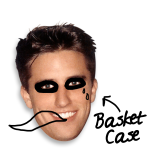 You’re only young once. But if you’re lucky, you’ll be young-at-heart forever.

My father possesses this rare gift. At the age of 76, he’s still the same dreamer with the Elvis Presley comb-over and a sweet tooth for Hollywood endings.

Lucky for me, all signs indicate that dad’s youthful heart defect hasn’t skipped a generational beat. I don’t just reminisce about those “I want my MTV” wonder years. I’m not merely a nostalgic who watches Freaks and Geeks and The Goldbergs (both great shows) or quotes John Bender like a “neo maxi zoom dweebie.” I go further than that. 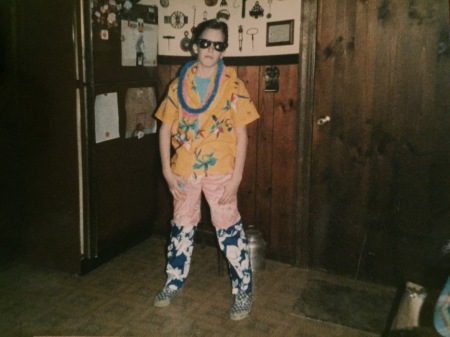 I’m not your Magic Garden-variety nostalgic who simply remembers the ’80s, I inhale them. I let the ’80s seep so deeply into my pores that I need Clearasil to fix the zits.

Understandably, my significant other thinks I may have a problem. To my wife, being young at heart also means that I’m lost in time…I’ve never grown up…and I still haven’t found what U2’s looking for. I remind my significantly more mature other that I use the fond memories of yesterday as my pop-culture-infused energy source. In today’s youthful terms, they’re like power-ups that help keep me optimistic about the future. When I revisit pop-culture from the ’80s, I also remember time spent with my family, my neighborhood friends, a home that I couldn’t wait to come home to, and a president who made me feel safe…even during difficult times.

By difficult times, I mean like this one time in 1982:
I came home from school like every other day. I changed into my sweat pants, remembering to carefully cuff them just below the knees. I pulled my Wigwam tube socks just below my balls. I laced up my Jaclars and raced downstairs to find the end of the world as we know it (5 years before REM did). 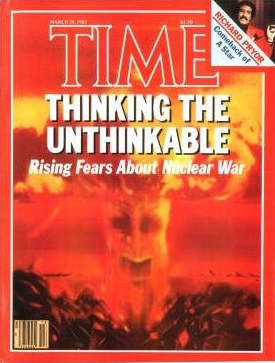 Seeing this TIME Magazine cover story was like experiencing my own private “The Day After”. The mental fallout was so severe that I’d Poltergeist myself into our Zenith at the mere mention of the words NUCLEAR WAR.

Shortly after TIME Magazine foreshadowed why I’d one day pop Xanax like Tic Tacs, my father introduced us to a SONY Betamax. He also gave me my very own Video Express card. As an escape from nuclear hysteria, that card quickly pimped me into a rental whore. Late at night, when dad was watching the news downstairs, I’d play the movies extra loud upstairs. This way I’d drown out any news of the nuclear arms race and the inevitable extinction of Morris Plains, NJ. No joke, when I wasn’t navigating the aisles of Video Express, I was mapping out the quickest Jaclar route from Sussex Avenue School to my home on 14 Meslar Road. You know, in the event of global thermonuclear war.

But that was life in the ’80s. I think we all had active imaginations that fueled our childhood anxieties. We also knew our parents had a lot on their cholesterol-filled plates, so we couldn’t run to them every time something went bump in the night. I now realize, of course, that we were the last of a great generation of kids who solved their own problems. We were dreamers who looked up to the stars, not down at our cellphones. We were the first generation to have VCRs and video games; the first generation to be raised on Steven Spielberg and Stephen King; and the last generation whose parents didn’t have to worry if we strayed too far from the yard. 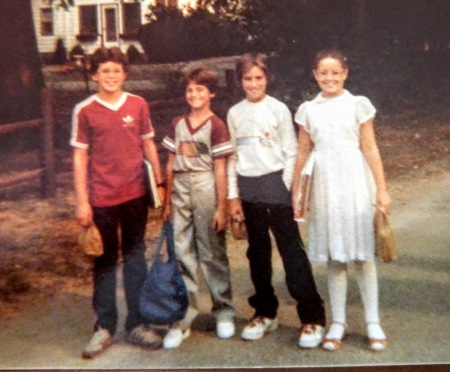 The 80’s were difficult times, sure, but they were simpler times. As kids, we were able to exempt ourselves from the problems of the adult world by simply disappearing until dinnertime. After dinnertime, I disappeared into the movies that captured the spirit of that time. Classic ’80s movies empowered us and gave legitimacy to our far-flung fantasies. The ones where ordinary, lower-middle-class kids could do extraordinary things.

’80s movies made us believe that:

6 kids, a treasure map, and a pirate ship loaded with booty can save the Goondocks.
(SPOILER ALERT: Their parents didn’t even have to schedule the play date). 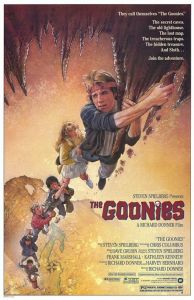 With the help of a boy and his flying dirt bike, an alien voiced by Debra Winger can phone home without an Apple or Samsung device. 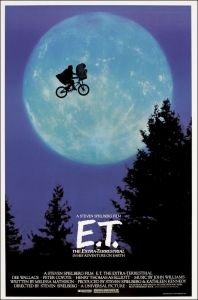 Boy who sweeps leg no match for karate kid who wax on and whacks off (sorry). 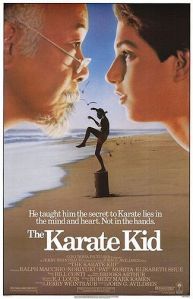 8 kids called the Wolverines can save their high school from a Russian invasion and Charlie Sheen. 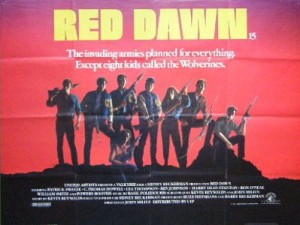 When my young heart reminisces about the “good ol’ days”, I’m actually just tapping into the spirit of that simpler time. Take this election season for example. So disheartened by both major-party candidates, I desperately needed to refuel my pessimistic 2016 engine with 1.21 gigawatts of Reagan-era optimism. So on the advice of a friend, I turned my attention to a Demogorgon monster in an upside down world. No, this Demogorgon is not one of the monsters running for president. And the upside down world isn’t the DNC, the RNC, or Run-DMC. It’s the latest binge-worthy sensation from Netflix called Stranger Things. A show that my aforementioned friend described this way:

“It feels like a show written by Stephen King, directed by Steven Spielberg, and starring
the cast of the Goonies. Oh, and Winona Ryder is still kinda hot “

No further selling was required. I finished the sometimes scary, always spectacular 8-episode series in 2 days. In bed suffering from a brutal ulcerative colitis flare, Stranger Things proved to be a better antidote than any ass enema. It had me shrieking in fear, blubbering with tears, and goose-bumping like a 12-year-old all over again. In addition to a tremendous cast of kids, it features familiar ’80s faces like Winona “Heathers” Ryder and Matthew “Vision Quest” Modine. The nods to the ’80s classics are endless. The chills feel like they’re courtesy of Stephen King and John Carpenter; the thrills are the work of Spielberg; and the three sides of the teenage love triangle are shaped by the John Hughes classics. But it’s almost an insult to call Stranger Things an homage to ’80s movies. It doesn’t just reference ’80s movies and look like an ’80s movie. It feels like an ’80s movie too. With each new episode, I was reminded how I felt the first time I watched all those kids-can-do classics. Lost innocence found…some 30 years later. 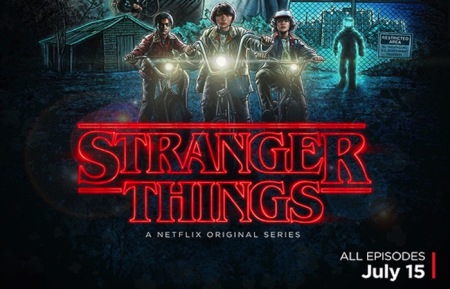 For me, the Duffer Brother’s “Stranger Things” felt like a time portal trip through the Poltergeist TV. After 8 tightly-packaged, swiftly-paced episodes, I triumphantly screamed: “They’re baaaack” in reference to the ’80s. And this child of the ’80s is waiting anxiously to learn if “Stranger Things” will be baaaack for a season 2.

Stranger Things is great entertainment. Escapism at its best. A reminder of a simpler time before far-flung fantasies gave way to far-too-real realities. Today, our worst fears aren’t dreamed up after reading a doomsday scenario in TIME Magazine. They’re not played-out on Dungeons & Dragons game boards in the tree houses and basements of suburbia. Today’s worst fears actually come to life. We watch them in real-time. They’re devoured on social media, recycled on the nightly news, and then spun ever-so-delicately to fit his and her own political point of view.

For a brief 8 episodes, however, Stranger Things offered a welcome respite to the hate-filled campaign coverage that proves we’re living in strange times with the risk of stranger (and scarier) things to come. (Where’s the Xanax?)

So far I’ve been steadfast in my belief that neither of our current major-party candidates is worthy of my vote.

So the next time someone asks me:
“But if you had to vote for one candidate…right here…right now…who would it be?”

My answer will be:
“I’ll endorse Stranger Things right here. And I’ll vote for a season 2. Right now!”

Like my father, I proudly remain young at heart…and apolitical to the core. 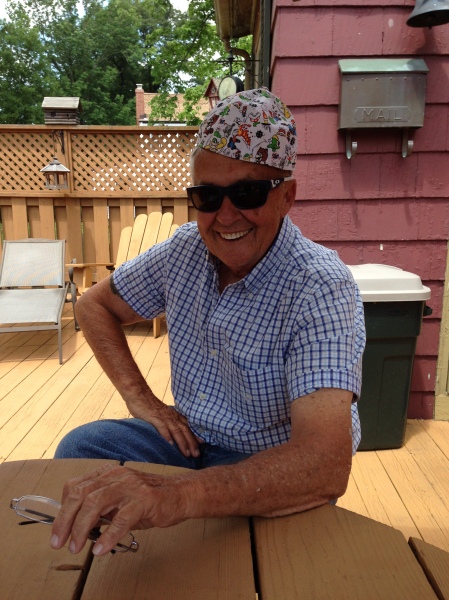 4 thoughts on “The ’80s: Stranger Things from a Simpler Time”