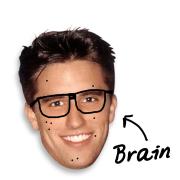 If life were a sitcom, our worst fears and biggest problems would be introduced, pondered over, and resolved within 24 minutes. When “calm, cool, reasoning” failed to deter a bully, we’d face our tormentor head-on and he’d never rear his ugly mug again…unless his sitcom got picked up for syndication.

When I was growing up, endless repeats made Buddy Hinton the poster child for the schoolyard bully. You remember that episode, right? “It’s the story…of a lovely lady…” who comes home in tears after Buddy Hinton picks on “the youngest one in curls.” Peter tries admirably to defend his sister Cindy—the lisping Goldilocks—but he doesn’t get porridge for his efforts…just a black eye. So Mr. Brady decides that Peter must learn to defend himself. Peter does…and he knocks Buddy’s “tooth looth”…and all is right in Brady Land (until it’s time for Peter’s voice to change). 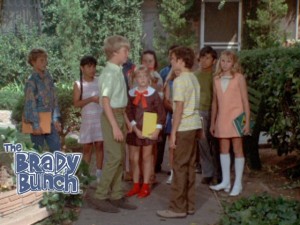 While I was never bullied growing up, I was definitely an easy target for teasing (proof: I wore Bugle Boy kaki suspender pants jacked up to my nipples on the first day of school. Not pre-school, HIGH SCHOOL)! So yes, I had my awkward, slow-to-reach-puberty teen years. And as my brother likes to remind me, I had more ticks than Lewis Morris Park. There was my “ostrich-neck” twitch, which is hard to explain and nearly impossible to watch. With whip-like force, I would lunge my neck as far as it could go from left to right. Imagine watching a mental patient trying to eat French fries off his shoulder and you’ll have a pretty clear picture. There was also my “porno grunting” habit, which began innocently as I would try to clear my throat perpetually with a “Ha-um”. Until eventually, my “Ha-um, Ha-uh-um” slowly transformed into a one-man symphony’s rendition of “Orgasm in C Minor.”

The point is, I endured my fair share of weirdness and loneliness growing up. But while this made me an easy target for bullying, I was never targeted. Was I prepared to fight a bully? Probably. Was I prepared to take flight from a bully? Maybe. But what I can’t imagine are feelings of loneliness and shame that bruise so deeply that a teen would choose suicide over subjecting him or herself to another day of merciless taunts. This is how far bullying has come since the days of Buddy Hinton telling Peter Brady to “cackle like a chicken.”

In today’s society, bullying extends outside the school bus and beyond the schoolyard. The bruises inflicted by today’s Buddy Hinton don’t heal from a slab of meat that Alice stole from Sam the butcher. The punches are often viral…thrown from a mobile device…and forwarded by others. The bruises are more often psychological than physical….and the damage often goes unnoticed until the victims finally make us notice.

In the troubling documentary, “Bully” (available on Netflix), we follow a group of teens and tweens who face constant bullying in the form of physical and verbal abuse. We meet Kelby, an out-and-proud 16-year-old who faces homophobia from students and teachers on a daily basis. We meet Alex, a 12-year-old whose daily routine includes humiliation and assault on the school bus (or whatever you call being stabbed with pencils repeatedly). Alex can’t bear to tell his parents about the abuse, and I couldn’t bear to sit by and watch grieving parents whose sons chose flight…in the form of suicide. 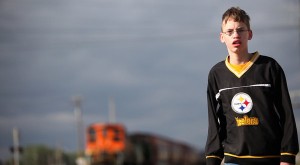 Yes, the film only states the obvious: feelings of loneliness are one of the most painful consequences of bullying. But what the film doesn’t say is that loneliness is often the cause of bullying. And it’s not only the socially isolated who are targeted—for every “new kid”, “fat kid”, “gay kid”, and “basket case”…there’s the perfectly ordinary kid who’s bullied for reasons only his or her tormentors know. Maybe it’s jealousy fueled by the tormentor’s own insecurities. Whatever the case may be, the bully virus doesn’t discriminate. And today, it takes more than a stiff right hook and a cup-o-chicken-soup to cure the virus.

Today, any twit can tweet, text, or post a comment that acts like a weapon of mass social destruction for an unsuspecting kid. But for reasons never explored in “Bully”, and for reasons I’ve never understood, why do we as a society fail to embrace—or simply protect—the most isolated and vulnerable kids? How do we as parents monitor bullying when the opportunities to bully extend way beyond the few times that our kids are unsupervised at school (cafeteria, recess, school bus)? Is it as simple as reminding our children that being an “innocent” bystander to bullying is in fact part of the disease?

“Bully” doesn’t offer any answers to these questions. It only offers the testimony of brave youths and heartbroken parents who still search in vein for answers. I highly recommend that you seek out “Bully” and encourage your kids to do the same. It’s time that we encourage our kids to stop being indifferent to bullying…and to make a difference—to stand up against bullying instead of standing by.

In my lifetime, I’ve known a teen and a teacher who committed suicide. I can’t be sure that bullying was the cause. But I sensed their loneliness, I assumed they were struggling, and I failed to act. Today I live with the regret of knowing that maybe all it would have taken were a few simple words of encouragement. Not from a family member whose love is unconditional…but from peers whose respect every teen yearns to earn. Maybe all it takes is a simple nonverbal cue. A wink or a smile that says “Hang in there….I’ve been there too.”

Because, let’s be honest, haven’t we all?

To learn more about the movie “Bully” and The Bully Project, visit www.thebullyproject.com. 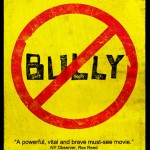